Shupe Stands up for Small Business

Big Delaware-based breweries are picking other states to expand. This is why

It was the former home of Don Pablo’s Mexican restaurant near the Christiana Mall, which closed in late 2018 after a 19-year-run.

Not only was the site in a high-traffic area, but the brewery had previously converted a former Don Pablo’s restaurant in South Carolina and it wasn’t a big job, thanks to Don Pablo’s brick buildings, which fit Iron Hill’s aesthetic.

But Iron Hill, which got its start on Newark’s Main Street in 1996 and has grown into a regional chain with 19 locations in five states, couldn’t pull the trigger on the deal for one reason: Delaware law.

Delaware Code states that a licensee is limited to three brewpubs in the state. And since Iron Hill already had spots in Newark, Wilmington and Rehoboth Beach, they were forced to expand elsewhere. 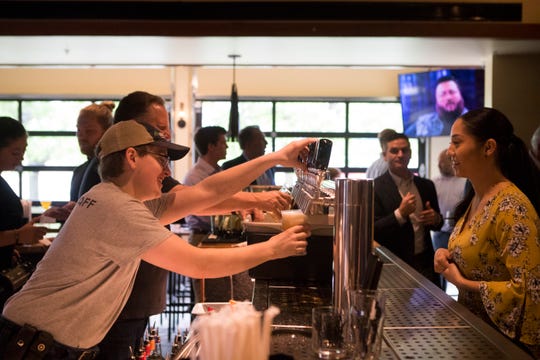 “That was a piece of real estate that became available that we couldn’t consider because this law was in place, but we would have pursued that site in earnest,” says Iron Hill co-founder Mark Edelson. “We are at our limit in Delaware, so right now we’re signing deals in other states.”

Legislators who were already pushing to abolish the rule are pointing to Iron Hill as an example of a Delaware-born brand that is being forced elsewhere to grow.

Last month, Iron Hill announced a new 18,000-square-foot brewery and taphouse would be built 20 miles north of Delaware in Exton, Pennsylvania. It is set to open next summer.

While Iron Hill could have built a stand-alone production brewery in Delaware, they were forbidden from including a brewpub due to the law. That sent the brewery’s co-founders looking over the state line for one of their biggest projects yet.

Rep. Bryan Shupe, sponsor of H.B. 158, which would totally abolish the three-location limitation, says it doesn’t make sense for the state to sit back and watch a well-known, homegrown beer brand such as Iron Hill take their success elsewhere. 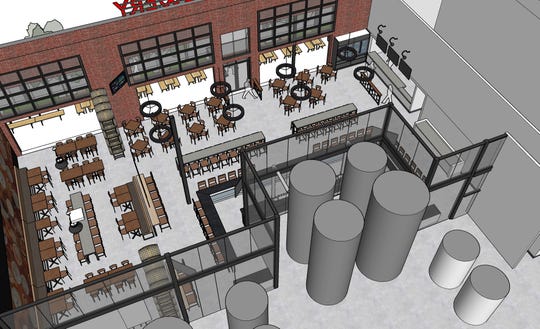 “It puts an unnecessary burden on these companies that are trying to expand and create jobs here in Delaware,” says Shupe, former mayor of Milford, where Mispillion River Brewing is headquartered. “We’re hindering their ability to compete.”

Edelson and fellow brewers were pushing hard earlier this year to get the legislation passed, with Iron Hill hoping it could consider Delaware locations for its new production brewery and brewpub.

“Our timeline is much faster than the legislature, so we had to make a move — strategically we had to open in 2020. And unfortunately anything that would be possible in Delaware was taken off the table,” he adds. “Until the law is changed, it’s a non-starter.”

The bill, introduced in May in the House by Shupe, never got out of the Economic Development, Banking, Insurance & Commerce Committee and will get a fresh push in Dover this winter. (The Democrat chair of the committee, Rep. William Bush, says he supports the bill and expects there will be debate about whether to totally eliminate the limitation or raise the number of allowable brewpubs above three.)

Shupe and fellow Republican Sen. Ernie Lopez, the bill’s sponsor in the Senate, have started their push already, actually. The pair wrote an editorial in local newspapers last week pointing to Iron Hill’s Exton announcement as a clear example of why the law needs to be changed.

“My plan is to take the bill back early in the session and get it up for a vote now that there’s public attention focused on it,” Shupe says.

It wouldn’t be the first time the restriction was changed by the General Assembly.

The amount of brewpubs allowed in the state by a licensee has changed over the years, says Delaware Alcoholic Beverage Commissioner John Cordrey.

The limit was originally one and was raised through legislation in the ’90s when craft breweries began to sprout across the state.

Smaller breweries want the change, too

It’s not only major brands like Iron Hill running up against the three-brewpub rule.

Smaller operations such as Milford’s Mispillion River Brewing and the Rehoboth Beach-area Revelation Craft Brewing Co. also are reaching their limit in terms of in-state expansion.

As Edelson puts it, “These smaller homegrown brands are looking to expand in a tight geography and probably right now don’t have the aspirations of going multi-state, but the law would force them to do that if it isn’t changed.” 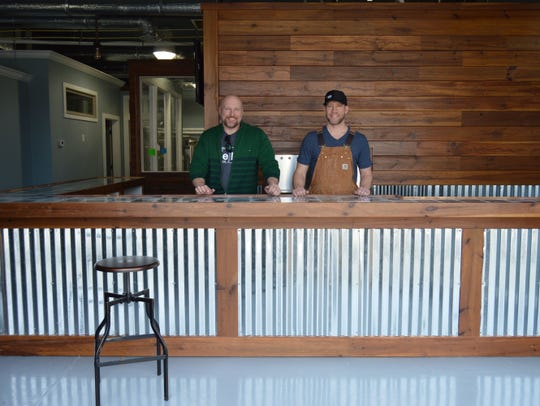 Revelation has announced its second and third locations, which will be in Middletown and Nassau, both expected to open in 2021. Its production brewery in Georgetown at the former site of 16 Mile, set to open this winter, will not have a brewpub. Instead, they are partnering with a still-unannounced local restaurant group to run a restaurant on site.

“We have already hit our maximum and we don’t have anything north of the C&D Canal. It’s crazy,” says Harry Metcalfe, co-owner of Revelation.

Since Metcalfe and his partners knew their brewpub limit was three, they didn’t consider testing smaller towns in the state or other more risky areas that have never had a brewpub.

NEW IN DELAWARE: Move over White Claw, Delaware now has its own craft hard seltzeThey knew they had to shoot and they weren’t about to take any wild chances, so the owners settled on the beach location in Nassau and another in the still-booming Middletown area.

“You have to pick three locations that have the best opportunity to grow your business and make money. These smaller communities without brewpubs, I don’t think they are going to see them,” he adds. “Those areas are going to miss out on someone coming in with a cool, smaller concept.”

Now that his company is at its limit for brewpubs in Delaware, Metcalfe is faced with having to go out of state to expand if the law isn’t changed: “I was born in Delaware. I went to the University of Delaware. I’m a Delaware guy. I’d prefer not to have to go to another state.”

Metcalfe says the restrictive rules implemented by the state fly in the face of the efforts of state’s tourism board, which heavily promotes Delaware’s breweries as destinations via brew trails, television ads and more.

The craft beer industry with its 27 craft breweries in Delaware has an estimated $388 million economic impact on the state, according to the Brewers Association, a trade group that represents the craft brewing industry.

That places Delaware ninth in the country per capita, the group reports.

“It’s a mixed message,” Metcalfe adds, “and it’s not logical.”

Shupe’s proposal would not just increase the number of brewpubs a licensee could own. It completely eliminates the rule.

For him, it’s about principle.

“At the end of the day, this is a debate about whether we want free market principles to guide our legislation or do we want to give privilege to a few individuals who are at the top of this industry,” he says. “My bill allows as many jobs as they want to create and as many locations they want to have.” 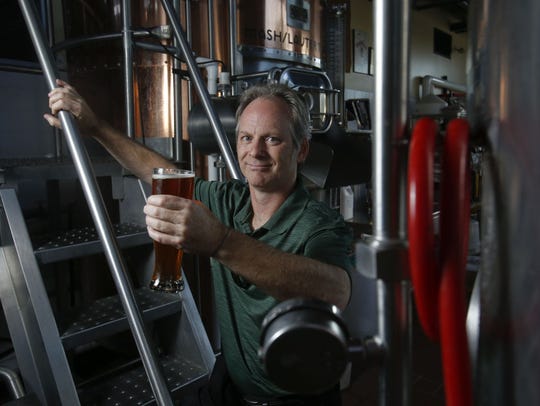 John Medkeff Jr., Delaware beer historian and Wilmington author of “Brewing in Delaware” ($21.99, Arcadia Publishing), however, isn’t sure completely eliminating the restriction is the way to go.

“I believe there should be some cap because if there’s none, you can have one of the big breweries come in and set up on every corner and drive everyone out of business,” says Medkeff, of Wilmington. “But even if we expanded it slightly, it would be a huge help and we probably wouldn’t have lost Iron Hill.”

The legislation to eliminate the restriction pits craft brewers against opponents of the change, largely beer retailers, beer distributors and the union drivers who cart brews across the state, Medkeff says.

“They fear it will have a negative impact on what they do. Why is three the magic number? I don’t know,” he says. Opponents of the bill “have the upper-hand in that they have the ear of the legislature. People have vested interests to protect and I get it. But is that in everyone’s best interest?”

Medkeff says many of Delaware’s liquor laws are outdated, some stretching back as far as the 1930s.

“A lot of Delaware’s [liquor laws] still on the books are based on realities that existed 25 to 85 years ago,” he says. “These protections were carved out way back when to protect fiefdoms and made sense at the time. It may no longer make sense. 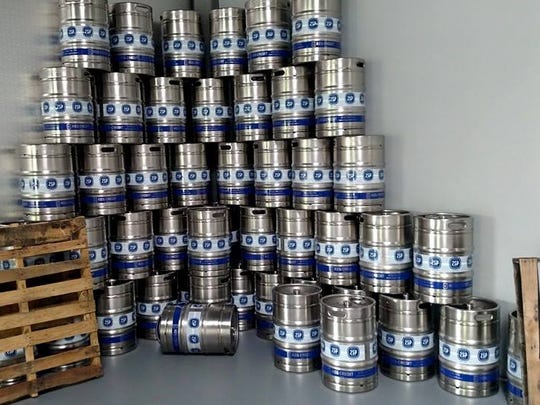 “Our legislation has been way too slow to catch up with the industry the way it has grown locally here. And it’s much more restrictive than surrounding states. With our small size, you would think we’d have the ability to be a little more nimble with our laws.”

It wasn’t the three-brewpub rule that led to another well-known Delaware brand to skip across the state line in 2015. It was another part of Delaware Code.

Two Stones Pub, which originated near Newark and now boasts six locations, spun off a brewing operation a few years back. And when it came time to find a home for 2SP Brewing Co., the ownership settled on Aston, Pennsylvania rather than the state where they got their start.

The issue was that in Pennsylvania, 2SP Brewing Co. owner Michael “Stigz” Stiglitz was allowed to self-distribute his beers, which he did for about 1 1/2 years. In Delaware, the state has a three-tiered system with producers, distributors and retailers all involved in the booze business.

For him, it made the best financial sense to go that way. 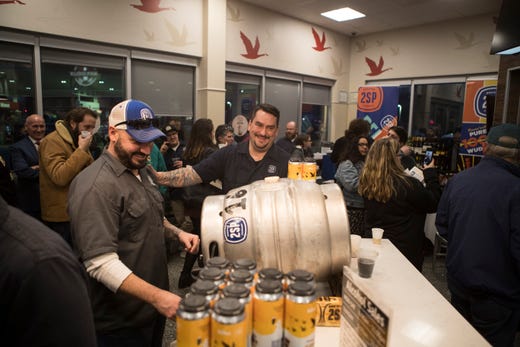 Stiglitz, who also owns four locations of the Two Stones Pub six-restaurant g Newark, Brandywine Hundred, Middletown and Hockessin, says the Delaware laws helped push him to jump to Pennsylvania for the brewery.

Even so, but his heart is still with The First State.

“I love Delaware. Most of my businesses are here. It’s the greatest state in the country,” he says. “It’s fantastic. I’ll never move. I’ll never leave.”

Medkeff hopes this most recent push for change spurs the General Assembly to re-examine the state’s liquor laws with an eye toward the future, not the past.

“The industry has grown here despite the slow movement on the legislative side,” he says. “We’ve been completely reactive and have not thought in any real way about how we can take this and grow the industry and expand consumer choice. We’re doing well, but we can be doing so much better.”

It has been an honor to represent you over the last year in the Delaware General Assembly. I have been humbled by not only the support of residents in our community, but their willingness to Read more…